The 2018 Award Ceremony took place at the Wildman Theatre, Ilkley Playhouse on Wednesday 3 October, as part of Ilkley Literature Festival.

Dawn Cameron chaired the event, which featured a fascinating and wide-ranging exploration of race, politics, publishing and how greater variety benefits us all, with journalist, broadcaster and artist Bidisha.  Prize Director Fiona Goh thanked the Prize’s many supporters, funders and the whole team who made it happen, including the writers themselves.  Rachel Percy from Aspire-igen outlined the nature of the company’s partnership with the Prize and how we have worked together to create opportunities for Aspire-igen’s learners.

Head judge Susheila Nasta spoke eloquently about the judging process and the journey that the writers had taken the judges on this year: 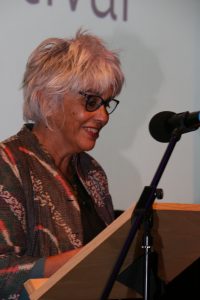 It has been an incredible privilege and wonderful experience to read the novels and short stories of so many talented new writers; to be introduced to their work. I feel I have literally partaken in a feast of talents, and been taken into a range of fascinating, intriguing, sometimes disturbing but above all engaging imaginative worlds. It has been like an invitation to enter someone’s house, to sit down and share their often most intimate memories and stories. But those houses have come in many shapes and sizes. As judges, we have been  transported across several geographies, whether to South Korea, India, Yemen, the US but also inside the local within the Punjabi community in Handsworth, a young boy’s life in Shadwell, to depictions of entrapment and past colonial histories such as the Anglo Indians or life in Alexandria just before the Suez crisis in 1956.   Politics has been important in many as has these writers’ different engagements with pressing contemporary themes.

It has been said of fiction that it enables lots of different dialogues to go on at the same time and a number of different perspectives. Reading the books has been especially interesting in terms of how this year’s authors have engaged with pressing contemporary issues including of course politics, but also increasingly vexing subjects such as euthanasia, dementia, religious fanaticism, asylum, abuse and the ethics of writing and living trauma. There is huge diversity, for example, on the shortlist which is indicative of the long list, too, and the wider prize material we read.

Brilliantly diverse and evocative readings from the six shortlisted writers followed (you can read excerpts of their work here), and the Soroptimist International Great Britain and Ireland (SIGBI) President Sue Biggs outlined how the Prize fits with the ethos and aims of Soroptimist International, before going on to announce the SI Readers’ Choice award, based on 22 votes from SI members across the UK and Nepal.  Omega Douglas received this award – following in the footsteps of former SI Readers’ Choice winners Karen Onojaife, Kit de Waal and Jamilah Ahmed – comprising £100 from SI Leeds and a two-year Mslexia subscription, for her novel Hibiscus, Rose, Jacaranda.

Sue Biggs announced the 3rd Prize winner for the 2018 SI Leeds Literary Prize as Kavita Bhanot, for Baba ji on Boulton Road, and the 2nd Prize winner as Yvonne Singh for One Man’s Revolution.  The 1st Prize and Aspire-igen award went to Shereen Tadros for Say Goodbye to Her.  Huge congratulations to all our winners and the fantastic shortlisted writers – you can hear them in London for the London Literature Festival and Asian Writer’s Festival in October, and we look forward to working with them on the Prize Plus programme of writer development.