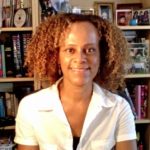 “This is a timely and crucially important initiative to support the creation and publication of fiction by black and Asian women writers.”

She reviews books for the Guardian, Times and Independent and has written fiction and drama for BBC radio.  Since 1997 she has undertaken over eighty international tours as a writer giving talks, readings, courses and workshops on all five continents including teaching stints at several universities including Barnard College, USA and the University of the Western Cape, South Africa. She has a doctorate in Creative Writing from Goldsmiths, University of London and  is currently Reader in Creative Writing at Brunel University and teaches for the University of East Anglia/Guardian fiction course partnership.

She has judged several literary prizes including the Orange Award for New Writers, the TS Eliot Prize and the National Poetry Competition. In 2012 she was Chair of the Caine Prize for African Fiction, Chair of the Commonwealth Short Story Award and judge of the Poetry Society’s Poetry News Competition.

Her awards and honours twelve ‘Book of the Year’ selections in British newspapers including a Times ‘Book of the Decade’ for The Emperor’s Babe in 2010; several literary awards include the Orange Youth Panel Award; Arts Council Writers Award; Nesta Fellowship Award; Big Red Read Award, and she was elected a Fellow of the Royal Society of  Literature in 2004, of the Royal Society of Arts in 2006 and she was made an MBE in 2009.  www.bevaristo.wordpress.com