Sue Woodford-Hollick OBE (Lady Hollick) is a former Chair of Arts Council England – London and member of the ACE National Council. She is currently a director of AMREF, Africa’s leading health development NGO, based in Nairobi and chairs the board’s Fundraising and Communications Committee. She is a Trustee of the Free Word Centre, Complicite Theatre Company and Chairs the Leaders Quest Foundation. She is a former director of the Royal Commonwealth Society, former Chair of Tate Members and recently retired member of Tate Modern Advisory Council. She is the founder and co-owner of Bringing Up Baby Limited, a childcare company which runs a group of high quality day nurseries in London. 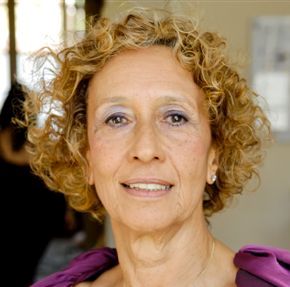 In 1969, she joined Granada Television in Manchester as a newsreader and presenter/reporter on the regional news magazine programme and progressed to become one of the few women to produce/direct Granada’s flagship current affairs programme “World in Action”.  In 1981, she joined Channel 4 Television as founding Commissioning Editor for multicultural programmes, one of the channel’s key priorities.  She set up the department, devised and implemented a programme strategy and commissioned a range of programmes which informed, entertained and reflected the interests and diversity of Britain’s minority ethnic communities.

In 1989, she set up and ran her first business, Bringing Up Baby Ltd. The company owns and runs 5 full time day nurseries for the children of working parents.

In 1993, she took over the Chair of ‘Index on Censorship’, the international magazine for free speech, founded by Sir Stephen Spender in 1972.  She was instrumental in rescuing the magazine and re-launched it with a new editor-in-chief, Ursula Owen, a founder of Virago.  Together they increased circulation and raised sufficient funds to ensure the future of Index and its associated human rights work.  Sue is now a patron of Index.

She has been an advisor to the Foreign and Commonwealth Office on Caribbean affairs and was the Vice-Chair of the FCO Caribbean Advisory Group from 1998-2000. In 1998, she served as a commissioner on The Commission on the Future of Multi-Ethnic Britain, an independent enquiry set up by The Runnymede Trust and chaired by Lord Parekh.

In September 2000, she succeeded Trevor Phillips as Chair of the London Arts Board (now known as ACE, London), the independent funding body for the arts in London.  In March the following year, the Arts Council announced its plans to merge with the regional arts boards to create a single funding body for the arts in England.  In June 2002, the Secretary of Stare for Culture, Media and Sport, Tessa Jowell, appointed Sue to the national council of the new organisation, Arts Council England, and to Chair its London regional council, which she did for 7 years.

She regularly appears on the Power List of ‘Britain’s 100 Most Influential Black People’.

Sue Woodford-Hollick is married to the Labour peer Lord Hollick and has three daughters, one granddaughter and two grandsons. In 2011 she was awarded an OBE for services to the arts.